A couple of years ago, rhythm guitarist, songwriter and lead singer Rita Faria moved from Lisbon to Manchester to put a band together and start a journey towards world domination. 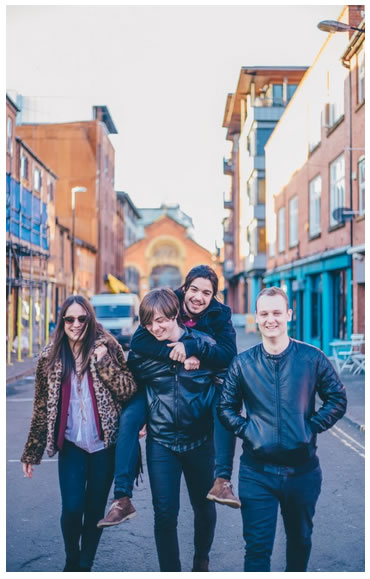 Louie Louie by A B Gray

After two years of searching and playing the scenes, failed jams and lost dreams, she finally saw light at the end of the tunnel when she found the first member to embark on this journey: from Oldham, Manchester, drummer Paul Limer went in for the kill with his phenomenal skills.

Together they went on to recruit the incredibly talented lead guitarist Tom Pallett, whose melodies and solos will knock your socks off.

Last but not least, Rita's brother Pedro Faria not only happened to be coming to town but they'd also been playing and writing and singing together for most their lifes. Despite hesitations for health and safety reasons for the people around us when we are working together, we finally got to the conclusion that his kick-arse bass lines as well as harmonies were much needed to complete the team.

And so, Louie Louie's final line-up has been together since September 2014 perfecting their sound and getting ready to entertain you with a sexy british/portuguese fusion that will leave you crying for more!

Exclusive interview with the Oldham Chronicle

Single launch with a headline gig

New photos by A B GRAY